Home » »Unlabelled » Professor calls for White genocide? "We got to take these m*******ckers out" and "They ain't going to go on for infinity and infinity"

Professor calls for White genocide? "We got to take these m*******ckers out" and "They ain't going to go on for infinity and infinity" 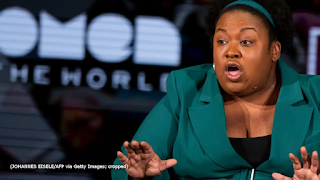 Brittney Cooper, an associate professor in the Rutgers University Department of Women's, Gender and Sexuality Studies, reportedly said, "We got to take these motherf---kers out," when discussing White people.

"White folks are not infinite and eternal, right?" she added.

• Is this where tolerance has brought us?

• How would the media react if a White professor had said the same about blacks?

• Is Cooper not aware that Rutgers was founded by Whites? Is she not aware that about 95 percent of all inventions originated in Western nations? Would she feel more comfortable in a black-majority nation? Does she live in a White neighborhood? Does she know why countless throngs of blacks are attempting to migrate to White-majority nations?

• Does she not know she would likely be living in a mud hut were it not for colonialism?