Should we celebrate Columbus Day? 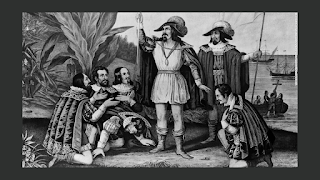 COLUMBUS DAY, October 12, 2021
Thanksgiving Day for Mestizaje at Tlatelolco, thanks to Columbus?
Charles Edward Lincoln, III
The question about whether Columbus Day is a good thing or a bad thing (kind of reminds me of Glinda's question to Dorothy: are you a good witch or a bad witch?) is worthy of more than a single thought or two. One place to start with is with what October 12 is to reflect on what this day is called in Canada and Mexico.
In Canada, October 12 is "Thanksgiving Day" (the seasons mandate an earlier harvest up there). I always liked that, but I have a very soft spot in my heart for everything Canadian (prior to the 1990s Chinese invasion, anyhow). In Mexico, October 12 is called "Día de la Raza" (the Day of the Race, specifically the Mestizo Race, which they sometimes call "the Race of Tlatelolco"---Tlatelolco being the final battle in 1521 during which the murderous Aztec were finally defeated by the murderous Spanish Christians).
The Battle of Tlatelolco (now just an internal neighborhood near the heart of sprawling Mexico City, with a monumental open air park called the "Plaza of the Three Cultures" = Spanish, Indian, and Mexican (Mestizo)), is probably the most meaningful monument focused on this day. Columbus' arrival, first in the Bahamas and then in what is now Haiti, only later in Cuba, Jamaica, and Central America, was a lot like the Battle of Tlatelolco: it was an amazing accomplishment for a few poorly equipped European men first to discover and then Conquer the New World.
But was it an unequivocally good thing? NOT from the standpoint of the Arawak or Caribs, who were basically wiped out by European diseases to which they had no immunity within less than a hundred years of the Spanish arrival. NOT from the standpoint of the Aztec inhabitants of Mexico City, who saw their capital completely destroyed.
That Aztec capital, called "Tenochtitlan-Mexico" was a city of "floating Gardens with beautiful temples" compared by the Spanish to Venice, Baghdad, Cairo and Chinese Cities all combined. They had quite simply never seen anything like it. But they filled in the channels between the "floating" islands and laid waste to the temples in the name of Jesus Christ, and slaughtered countless Aztec in the process. Was anyone "saved?" Mexico is now quite nearly a homogeneous Christian country, except for very recent Islamic inroads....
But in the beginning, "conversion" looked more like "murder, rape, and pillage" with very little Salvation to be witnessed. All of the events of the Spanish Conquest of Mexico happened within 30 years of Columbus' landing in what is now Haiti/the Island of Hispañola ("little Spain").
The population of Haiti was neither as dense nor as advanced as the Aztec, there were no Cities or Imperial Gardens on Hispañola AT ALL. And certainly no gold, which was Columbus' first disappointment. But finding no gold, Columbus decided to enslave the people of the Island. Unlike African slavery, he didn't buy them from their owners, he just used swords and guns and chains and put them to work.
In general, Columbus should be regarded as a brilliant navigator, and major star of world history, but a terrible Colonial administrator. So he was simultaneously great and horrible, miraculous and appalling. His sponsors, King Ferdinand and Queen Isabella, imprisoned Columbus at least twice in the 13 years after 1492, and Columbus died in disgrace. However, the Great Navigator's heirs fought in the Spanish Courts for another 30-40 years after Columbus himself died in what are called the "Pleitos Colombinos" and won significant family rewards.... and they are still a noble family in Spain to this day, 529 years later....the current 18th Duke of Veragua is named Don Cristobal Colón and he is a direct descendant of Columbus' only son Diego (http://www.christopher-columbus.eu/columbus-genealogy.htm)
So Columbus was, like so many human being, a bundle of contradictions, although his Zenith and Nadir were higher than most of ours. October 12, 1492, the landing on Watling Island (aka San Salvador in the Bahamas) and the two months after (until Christmas) were, after the Crucifixion and Resurrection of Christ, and the weeks until his Ascension, were probably the most import and transformative couple of months in the history of the world. Nothing was ever the same after Christ Rose from the Grave, and nothing could ever be the same after Columbus' rag-tag band of sailors spent three months or so in the Caribbean.
In some ways, many ways actually, I wish the Vikings of Vinland/Newfoundland had established the permanent link between Europe and North America. It would have been much easier on the American Aborigines for one thing, because a northern passage would not have so suddenly introduced a plethora of Mediterranean and African diseases to an unsuspecting continent.
So, in short, I think it is right that we celebrate Columbus Day as both Thanksgiving and the Day of the Race. Our Race, the European Race, conquered for a while but we will always get the prize for innovation and discovery and for curiosity of mind and philosophical experimentation (leading to "science").
at October 10, 2021
Email ThisBlogThis!Share to TwitterShare to Facebook