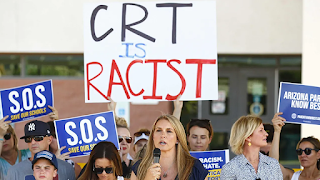 AbateHate.com — Critical race theory, or CRT, is an anti-White racist doctrine embraced by woke leftists. When CRT is presented in government schools, it become systemic. It is literally systemic anti-White racism.
Those who oppose this brand of leftist hate may pay a hefty price. That seems to be the case of an administrator working for the government school system in Indianapolis.
Reports say Tony Kinnett was "locked out of his email and Google Drive accounts and been told to work from home," according to foxnews.com.
Kinnett was reportedly cited for causing "clinical anxiety" at the workplace.
Could it be that Kinnett is the one truly suffering clinical anxiety due to social exclusion and marginalization simply because he opposes a quasi-religious dogma called 'critical race theory'?
Is it possible that the children forced to endure anti-White racist hate education are being psychologically damaged for life?
Is it possible that Kinnett has grounds to seek remedy in a court of law?
Takeaway...
• Marxism is like a religion is many ways:
1. It has a holy book, Das Kapital
2. It has a prophet/messiah type, Karl Marx
3. It has a zeal to make converts globally
4. It has creeds, doctrines, and dogmas (such as critical race theory)
5. It distinguishes between us-and-them
6. It shuns those who disagree, such as Tony Kinnett