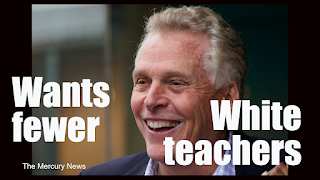 AbateHate.com — The governor of Virginia lamented the fact that about 80 percent of his state's teachers are White. Gov. Terry McAuliffe (D) noted that about half of Virginia's population is non-White.
McAuliffe said he wants to diversify the "teacher base".
Take aways...
• It appears that equality trumps quality in the governor's preferences for educators. Rather than seeking out the most qualified teachers, the objective seems to be to balance the color spectrum.
• The principle of elevating equality over quality seems to be a mainstay of Marxist ideology.
• When merit takes a back seat to Marxism, it hurts everyone. Nonwhite students will be subjected to sub-par education if the governor has his way in skin-tone-based hiring rather quality-based hiring.
• If tall men tend to be more qualified to play basketball than shorter men, then we should expect ball teams to be disproportionately dominated by tall men. Imagine if the NBA, in an effort to ease height discrimination, adopting a recruiting policy that required the average height of ball players reflect that of the general population.
Read more here ►