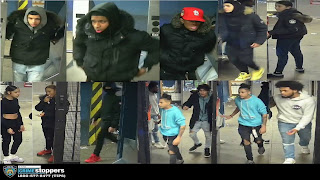 A man died after being hit by a subway train in New York City.
He was killed while attempting to rescue another man who was somehow forced onto the tracks after being beaten to the pavement by a group of "teens."
Roland Hueston saw what happened and tried to help.
Hueston died as the train smashed into him. The mob victim managed to survive, but with a fractured arm.
Two "teens" surrendered to police. Nine more are being sought.
"The teens attacked, punching and kicking the man repeatedly as they rifled through his fanny pack, taking his wallet and cash, prosecutors said. One of the teens, who is still at large, flashed a knife," according to nydailynews.com.
Take away...
Urban savagery continues to take the lives of hundreds of innocent people throughout the country. Our response is to elevate a career criminal to hero status while insisting the only black lives matter then pretending that segregation was motivated by racial hatred.
Read more at foxnews.com ►