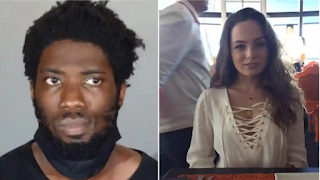 Unlike many victims of urban-jungle homicides, Kupfer was not an aspiring rapper. Rather, she was seeking a graduate degree in architectural design at the University of California Los Angeles (UCLA).

Moments before the attack, the victim texted a friend noting "bad vibes" from the attacker. Noting bad vibes from a Black person is considered an indication of racism, according to many woke leftists.