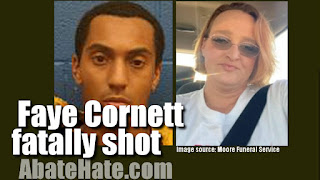 Held on charges of murder and kidnapping is 27-year-old Derek Tyrone Crockrum.

Crockrum is accused of fatally shooting Cornett, who was described as his girlfriend, and kidnapping the victim's 15-year-old daughter.

Authorities in Lamar County have released the identity of the man accused of killing his girlfriend and kidnapping her teenage daughter over the weekend.

Sheriff Danny Rigel confirmed Derek Tyrone Crockrum, 27, is being held on charges of murder and kidnapping.

Crockrum is accused of shooting his girlfriend to death at a home on Oak Grove Road on Saturday morning.

After the deadly shooting, Rigel said Crockrum kidnapped the Cornett’s 15-year-old daughter and drove her to Petal.

Rigel said the girl got away from Crockrum around noon and ran inside a store in Petal to call police.