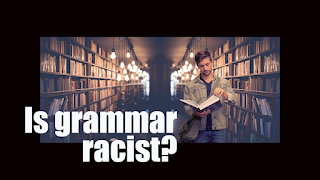 AbateHate.com — Grammar, along with punctuation and spelling, are apparently racist.
The reason? "Uneven and diverse linguistic legacies that everyone inherits," according to a professor at Arizona State University.
It constitutes “white language supremacy,” he concludes.
Apparently, students should not suffer lower grades for bad grammar, incorrect spelling, and misused punctuation. White students are inherently better at composition simply because the rules of writing reflect their culture. Consequently, they receive higher grades than, say, their Hispanic counterparts.
Obscured is the notion that the inequalities work both ways. That is, White students whose first language is English, would suffer setbacks if enrolled in a university south of the border in which subject matter is taught in Spanish or Portuguese.
That begs the question: Why do foreign students prefer to study at Western universities if they are destined to be dinged by “white language supremacy?”
Could it be that Western cultures are somehow superior? Could it be that Western cultures have enhanced the lives of all humanity? Could it be that tinkering with Western culture under the pretext of equality will, in the end, harm those the tinkerers profess to be helping?
Unanswered is why East Asian students enrolled in Western universities tend to outperform their culturally privileged White classmates.
It seems the far-left is not truly interested in equality, but in discriminating against White people.
[source]