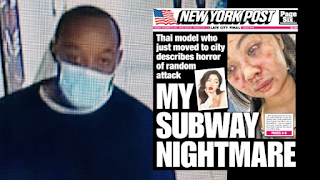 AbateHate.com —  Bew Jirajariyawetch, a 23-year-old model and recent immigrant from Thailand, was red-pilled last month when she was brutally beaten and robbed at a New York City subway station. The attacker appears to have been an urban savage.
Fortunately, the attack was captured by a video security camera.
Unfortunately, so-called "feminists" seemed unmoved by the attack, even though the suspect was a male. Apparently, the far-left views oppression as an exclusive franchise owned by White people.
Read more here ►