Female judge on leave after calling black intruder a... 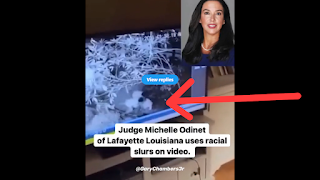 DailyKenn.com — The far-left seems more concerned about the use of a word than a potential burglary.

This is DISGUSTING! Judge Michelle Odinet is captured on video using racial slurs while reviewing home security footage. People's lives are in HER HANDS on a daily basis. This level of hate & racial bias should not be in our courtrooms! She needs to RESIGN! pic.twitter.com/TVny8kcaUZ

A would-be burglary was thwarted in Louisiana. A female voice on an audio tape is said to be that of Judge Michelle Odinet. She was recorded recalling the episode in which she used a descriptive term once commonly used for ratchet-behaving blacks.
The incident occurred in Louisiana.