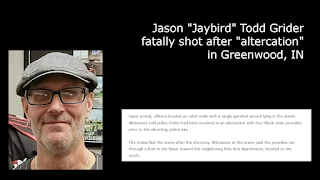 When I lived in Greenwood in the late 1970s, the city — which is adjacent to Indianapolis — was virtually all White and free of violent crime. And so it remained for decades. Things are beginning to change.

I never know which is proper grammar.

Virtually every Black neighborhood in the USA was originally built by and occupied by people of European descent.

As Blacks moved in, Whites moved out.

Marxists may attribute this displacement to an expression of White racism. In reality, it is a response to Black violence, declining property values, the subsequent decrease in property taxes used to develop infrastructure, etc.

Greenwood, Ind. is a real-time example in its nascent stage.

Ferguson, Mo. is an after-the-fact example.

Larman Williams was one of the first Blacks to buy a home in Ferguson. The move was heralded as a significant accomplishment for fair housing and civil liberties.

By all accounts, Williams was intelligent, highly educated, law-abiding, and non-violent. But the transition to Ferguson from a pleasant St. Louis suburb to a crime-ridden hell hole was predictable. Likewise, the future of Greenwood, Ind. is predictable.

While the history of Ferguson may be unpleasant to our sensitives, it is, nonetheless, coarse reality.

Are all multiracial jurisdictions violent?

Consider Hawaii. It is the most racially diverse state in the USA. It also boast one of the lowest crime rates.

Clearly, there is no correlation between dark skin and violent crime. If there were a correlation, we would expect White people to become more violent as they tan in summer months.

Intent on drawing a correlation between violent crime and class struggle, Marxists often point to poverty as the cause. Were that true, we would expect much of Appalachia to have a long history of violent crime akin to that in Black neighborhoods. Appalachia, however, has been relatively safe compared to the country's urban jungles.

Could drug trafficking be the root cause of Black violence? Again, we point to Appalachia that has a history of both drug trafficking and, earlier, bootlegging, without the extreme violence.

So, if racial diversity, skin tone, poverty, and drug trafficking don't cause violence, why are Black neighborhoods racked with violent crime?

There seems to be strong correlation between people groups with low IQs and low executive function — and its subsequent low impulse control — to violent crime in the neighborhoods they dominate.

Research by notables such as Richard Lynn, Arthur Jensen, and J. Philippe Rushton seem to suggest that the IQ sweet spot for impulsivity and violent crime may be in the range of high 60s to low 90s. That is, severely retarded people are not likely to be violent criminals.

Such conclusions fly in the face of Marxist theory that attributes social ills to social rather than pathological causes. The correlation between low intelligence and violent crime debunks Marxism at its core.

So what is the solution?

The solution is to encourage people with high intellects and strong executive function to procreate while discouraging those with low intellects and executive function to procreate. By doing the opposite, Western societies are effectively guaranteeing a future of violent crime. They are also assuring Marxists of a perennial class struggle between the 'haves' and 'have nots;' that is, those who have the intellectual capacity to create wealth and those who don't have that capacity.

Inevitably, apologists for Marxism will argue that any perspective other than their own is a throw back to eugenics and all its inhumane ills, both real and imagined. While eugenicists of the past certainly applied unethical practices to reach their objectives, the core principle of eugenics is more sound than its critics want us to belief. In fact, eugenics is practiced today at the prenatal level as children with mental and physical defects are aborted with the blessings and approval of those who otherwise consider eugenics anathema.

Finally, we ask the question, 'Who suffer most from the violent crime that plagues black neighborhoods?' The answer: the denizens themselves. For evidence, take a look at the faces posted at the National Gun Violence Memorial website.