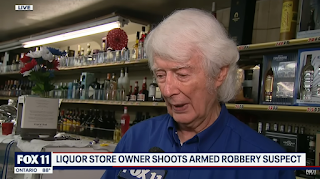 DailyKenn.com — 80-year-old Craig Cope, who shot and wounded an armed robbery suspect, said, "This isn’t a good place to pick".

That's a bit too late for the 23-year-old suspect who remains in critical condition.

"Stay out of Norco, because everybody in Norco has a gun," his wife added said.

The incident occurred in Norco, Calif.