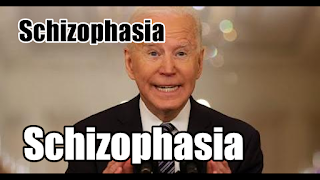 A word salad, or schizophasia, is a "confused or unintelligible mixture of seemingly random words and phrases", most often used to describe a symptom of a neurological or mental disorder. The term schizophasia is used in particular to describe the confused language that may be evident in schizophrenia.

From Psychology Wiki, we get this explanation:

In the mental health field, schizophasia, commonly referred to as word salad, is confused, and often repetitious, language that is symptomatic of various mental illnesses.

It is usually associated with a manic presentation and other symptoms of serious mental illnesses, such as psychoses, including schizophrenia. It is characterized by an apparently confused usage of words with no apparent meaning or relationship attached to them. In this context, it is considered to be a symptom of a formal thought disorder.

Let's forget politics for a moment, shall we?

Biden should resign — not to score points for Republicans, considering the cackling Kamala Harris would assume his roles — but for the best interest of the country and the entire world.

Schizophasia is considered to be an endogenous psychosis. That is, it is pathological and biological as opposed to learned. 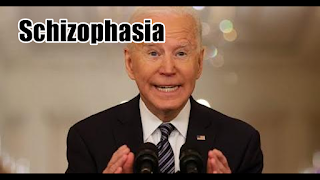