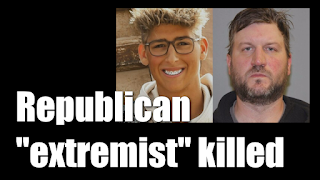 DailyKenn.com — 18-year-old Cayler Ellingson died after being ran over by an SUV in North Dakota, reports say.

The driver apparently disagreed with the teen's Republican views.

Shannon Brandt, 41, is charged with vehicular homicide and leaving the scene of a deadly accident. [source]

• Using hate speech, such as "extremists," "racists," or "Nazis," to vilify a group of people is hideous. Far leftists claim Blacks were similarly vilified in the American south and Jews were vilified in Germany in the 20th century. Yet, these same leftists use labels to demonize those they hate.