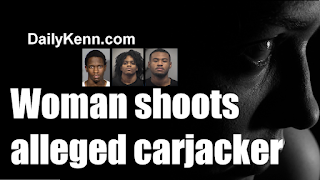 DailyKenn.com — An unidentified woman, presumed to be white, fatally shot a man during an alleged carjacking attempt in Las Vegas, Nevada.

Three others were arrested, accused of participating in the alleged carjacking.

Reports say the woman shot one of the suspects after they fired at her. She used a gun she earlier snatched from one of them. Police described the shooting as a case of self-defense in their report.

The deceased was not identified, but was presumed to be black.

at January 24, 2023
Email ThisBlogThis!Share to TwitterShare to Facebook
Labels: wb