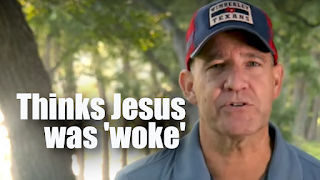 DailyKenn.com —
Chapel in the Hills in Wimberley, Texas appears to be a congregation of elderly White boomers.
It was during a church service that an apparent epiphany possessed the mind of lieutenant governor candidate, Matthew Dowd. Dowd decided that, were Jesus alive today, conservatives would consider him 'woke.'
(Note to Matt Dowd: Most conservative Christians believe Jesus is alive today.)
The notion is that Jesus would be an inclusivist who would welcome all people regardless of race, gender, sexual deviancies, etc.
(Note to Matt Dowd: Most conservative Christians do welcome people regardless of race, gender, sexual deviancies, etc. They just disagree with government intolerance, excessive taxation, abusive regulations, teaching abject racism — aka, critical race theory — open borders, man-made climate change, teaching children sexual deviancies in school, and so on.)
Oddly, after viewing Dowd's church's website, we wonder why he doesn't practice what he preaches and move his membership to a more inclusive congregation.
We also wonder why he lives in Wimberley, a city that is "93.5% white, 0.5% African American, 1.5% Native American, 0.3% Asian, 2.8% some other race, and 1.5% from two or more races. 11.2% of the population were Hispanic or Latino of any race," according to wikipedia.org.
[source]